February can be rough. The days are short, the weather is temperamental, winter closes us inside of its blue shutters…

But luckily, we have created several traditions to get us through, one of my favorite being, in atypical fashion, SUPERBOWL SUNDAY!

I, like many of you, went to a Superbowl party a couple weeks back and found myself so INSPIRED. Let me preface this by saying that in between the 2017 and 2018 Superbowls, I watched 0 minutes of football. So, it’s always a fresh experience for me. I couldn’t believe how physically strong the players were. I was also very captivated by how delicious the various party foods involving potatoes were. There were waffle fries (not from Chick-fil-A!), homemade potato chips (in three varieties!), and baked potatoes with gruyere. So, based on these two observations, I added two resolutions to my list for this year: 1) workout more; 2) eat more potatoes.

When I got home from the party, my blood sugar, despite a lot of extra insulin and monitoring, was above 200 mg/dl. I don’t like this – I don’t feel good when my bg is high and taking extra insulin before bed is a little frightening because of aforementioned nighttime lows. So I put the potatoes on the back burner, so to speak.

I did start moving more though. Yoga and walking have been good, along with a class or two at the student rec center. So with goal #1 underway, I got back to the potatoes.

Recently, I ordered a dish with shaved celery root when out at a restaurant. Between ordering and receiving my food, I forgot about this, and when it came I thought I was eating hashbrowns. Fancy hashbrowns, but still. So this weekend at the grocery store, remembering my positive celery root experience, I decided to branch out of my cooking rut.

If you’ve ever bought a celery root (also known as Celeriac), you know just how unappetizing it looks in its natural form. Celery root is, in fact, so ugly that I can’t believe we discovered it was edible. I can’t imagine being that first person to look at it and think, “I’m gonna eat that.”

But someone did and I’m glad.

It’s really a vegetable that you have to tackle – which goes well with the general metaphor of this post. I used this recipe from Bon Appetit for Celery Root Steaks with Tomatillo Salsa Verde as a basis.

Except I didn’t make the salsa because I planned to just pile my other food on top of the steaks.

Pro tip: if the steaks are tender but you want more of a golden brown look, flip them over to serve; most likely they are browned on the pan side. 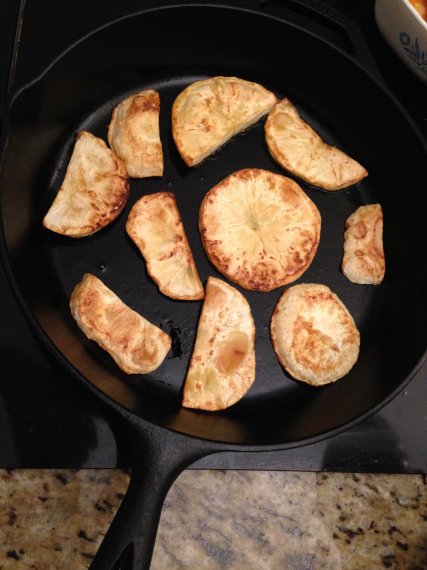 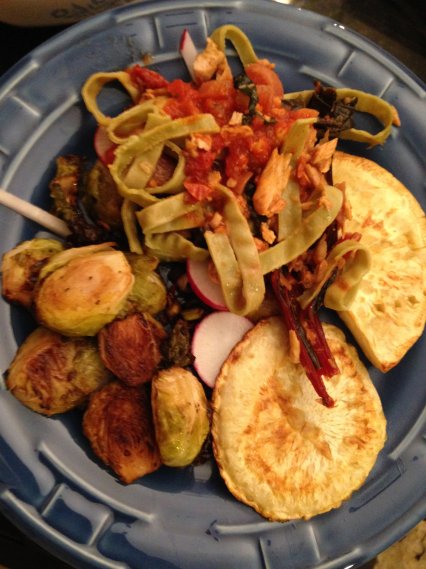 So, how do celery steaks stack up to potatoes, ounce for ounce?

1 cup celery root weighs in at 66 calories, 14 grams of carbs, and packs a powerful punch of 2.8 grams fiber, according to google.

Potato comes in at nearly double all of the above (except fiber): 116 calories, 26 grams carbs, 3.4 grams fiber, per cup.

So to me, diabetically speaking, Celeriac is the clear winner!