Every now and then I am reminded that I am in awe of the Earth.

This time it happened paddling down the Eno River after the sun had set, it’s rosy imprint slowly fading away into a violet-blue darkness.

The moment that it hit me involved a Great Blue Heron, so aptly named, sailing like a hanglider overhead, silver wings outstretched, croaking its primordial call.

This night, and all nights, this world exists here on the river, while cars whiz by each other and humans do their violent and hurtful human things.

The fugue of frogs began. At first it was the peepers, a high-strung section of music, the violins of the amphibian orchestra. Then the pickerels chimed in, their voices harmonizing into a smooth mezzo-soprano (I just looked up vocal range on wikipedia). The rubber-band frogs, I don’t know their scientific name, soloed their song of: “boing! boing!” And then, a tribe of frogs illuminated the soundscape with a single wave of speech, their voices so artificially high it sounded as though they had sucked the helium from some abandoned birthday party balloons. I tried to figure out what they were saying but was distracted by the fireflies, just a few at first, strobe-lighting the dark outlines of the sycamores and tulip poplars. Every third stroke or so the half-moon found its way through the dense branches and illuminated my boat or my arm, reminding me that I was now part of the scene. The frogs sang and played on to a constant chorus of insect sound.

As my mind drifted into their performance I wondered what it would be like to stay all night and just soak up this other world. Suddenly a new vocalist called out, a Barred Owl (as pointed out by my friend and fellow Frog Hollow Guide Cathy), with her signature, “Hooo cooks for you???” A friend, or suitor quickly responded in a lower barotone, “Hooo cooks for you???”

The stars were out now, so fine in the sky: the Big Dipper scooping up the darkness, and I thought, how did I get this lucky?

Which takes me back to chord that’s been running through so many of my discussions lately about luck and blessings and fate and purpose.

And I still don’t know, how things fell into place. But I feel so lucky to have found Frog Hollow Outdoors so early in my time in the Triangle and through them, a river playground to call home. And that’s just the tip of the heron’s wing. So many things, if I pause to look up, are glittering in my life.
Whenever this happens, which as I said, is every so often, I am reminded of my favorite poet Mary Oliver, who provides me with endless inspiration. Among the frogs and owls and soft clicks of bat wings last night I kept hearing these words from her poem, ‘Mindful.’

I see or hear

that more or less

And she goes on…I encourage you to read this and all of her work if you need to be reminded too of the awe out there, especially if you can’t get straight into the woods.

And I will hope that in the middle of any chaos or sadness or uncertainty, that I can remember the reassuring lullaby of a summer river at night.

These are two things I’m into right now. 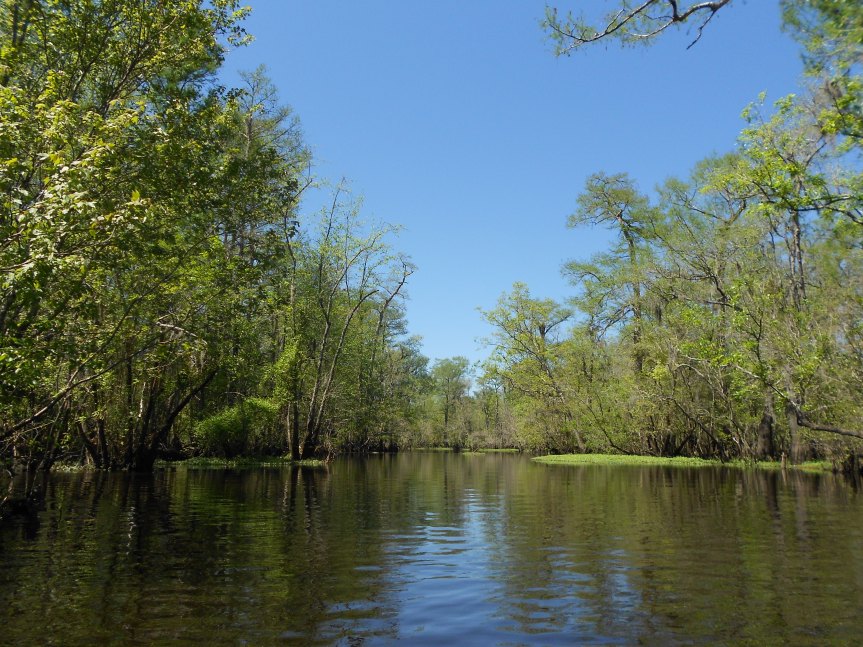 Thanks to adventures with Frog Hollow Outdoors I’ve discovered some amazing new rivers recently. Above is a view down the Black River near North Carolina’s coast, called so because of the high tannin content that makes its waters a coppery blend of dark blue, brown and green. Below and above the tree branches birds wade and fly: Anhinga, or snake-birds soar overhead, Great Blue Herons pick their way through the cypress knees.

From this and other recent river adventures I’d like to give a big T1D shout-out to the ever useful pelican case.

Such a pretty little thing, and air and water tight too! On the river I keep my novolog pen, some extra pen needles, a microfiber cloth, alcohol pads, a spare meter and lancet device, test strips, and chapstick, all sealed inside. All of that seriously fits into one case if you pack it just right. I have another one for my camera and honey zinger packet.

My pfd is also T1D friendly with a nice chest pocket for another honey zinger packet and maybe some energy chews, although these I keep in a plastic bag because there are many to a pack and I typically just have a few at a time.

Follow The Sweet Adventurer on WordPress.com
Join 914 other subscribers