The first thing I noticed after we pulled into town was the smell of smog. In Bolivia, on the weather report it is common to see ‘smoke’ listed as if it were a naturally occurring phenomenon like wind or rain. But smoke has been introduced into the nation, a byproduct of mining and concrete factories and the wood people burn in their homes to combat the dusty, dry, creeping cold of the Altiplano winter, which runs June through August.

After we’d checked into our hotel in the city center, we rode to the clinic in an ambulance that I’m still not sure the status of. It may currently be in operation, or it may just be the finest van in town. Upon entering the building we were greeted by immediate embraces and kisses from all who had come for the focus group. The first to hug me was a woman wearing a traditional pollera skirt and whose thick, jet-black braid ran far down her strong back. She kissed me solidly on either cheek and rubbed my shoulders vigorously, her eyes glistening with emotion.

That woman was the mother of Angela (name changed), a 19 year old girl who has had Type 1 Diabetes (T1D) since she was around 14. The next day we visited the whole family in their pueblito at the base of a giant tin mine where many of the residents, including Angela’s mother, work to collect minerals from inside the mountain or from the river bed that catches the heavy-metal runoff. 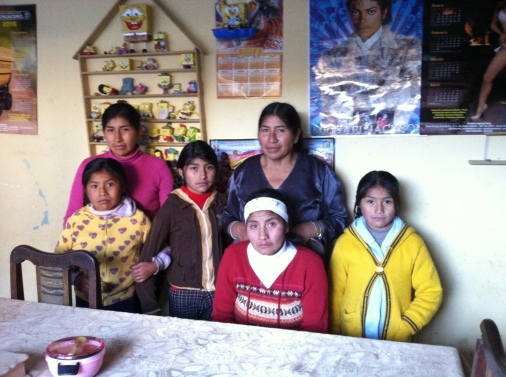 Earlier in the day we had boarded a dusty microbus on the side of the road next to women selling fried breads of all varieties and hot drinks in plastic bags with red straws sticking out of the tied ends. Maria bought one of each for the road. I poured hot water into my orange backpacking mug balanced on one knee and made a cup of instant coffee to sustain me through the morning van ride. We had three home visits ahead of us, separated by miles of pockmarked and potholed roads, and coffee was non-negotiable.

Each day from my time in Bolivia could stand alone as a life-changing experience based on the stories I heard and people I connected with, but this day in particular shines bright in my memory. Maybe it was the sun rising over the arid quinoa fields at the base of the Bolivian Andes, or talking with the teenage sisters who live with Type 1 Diabetes in temporary housing with no electricity or running water. But I suspect above all it was the immense kindness and generosity we encountered from the families we visited. Not only did they share their experiences living with Type 1 Diabetes and managing it in a country where finding supplies is hard and affording them is nearly impossible, but they also filled our stomachs with homemade breads, hot drinks, and even fresh sheep milk ice cream, frozen overnight in the rafters (that was breakfast).

All this social eating was a little tricky for a gal living with Type 1 Diabetes herself, but I came to realize just how immensely blessed I am to be able to manage my blood sugar with an insulin pump and to check my blood sugar anytime I want to. I already had some idea of this, which is part of why I wanted to go on the trip in the first place. I connected with the organization ‘Life For A Child’ (LFAC) because they provide test strips and insulin to children living with Type 1 Diabetes in low-resource nations who lack access to adequate medical supplies. I was hoping my practicum could translate to a learning experience for me and an immediate benefit for others living with Type 1 Diabetes who don’t enjoy the luxuries of management that we have here.

My purpose on the ground in Bolivia became to interview, chat with, observe and learn from as many people living with Type 1 Diabetes or supporting those who do. Over the course of three weeks and five cities I got to do over 40 interviews and focus groups with nearly 100 participants made up of youth with T1D, their families, and the clinical staff and volunteers who support them. Everywhere I turned, a new element of life with diabetes in Bolivia jumped out at me. It became apparent that Bolivian cultural values were critical to consider when thinking about successful health outcomes for youth with T1D, especially the role of the family. One participant who volunteers as a leader for the group in Potosí and who has had T1D for 23 years himself, said that in all the situations he has observed, “La familia ha sido fundamental para poderlo apoyar..cree una necesidad, de, en todo diabético, de que la educación no sea sólo en el paciente diabético, pero sea también en su entorno. Ese apoyo a la familia, o esa educación a la familia, creo que también es muy importante, porque es un daño que afecta la familia” (“The family has been instrumental in that it can support…it creates a need, that, for all diabetics, the education not reach just the diabetic patient, but also their environment. This support for the family, or education for the family, I think it’s also really important, because it [diabetes} is an injury that affects the whole family”).

Even though I know it works, I forget that gratitude is a choice, like a lens you put into your camera to brighten the vibrancy. It always works, sometimes more than others, to heighten our focus on the present and make life something solid to hold on to.

During the two weeks I was traveling over my break between semesters, I slept on 2 different sofas and 6 different beds. The hospitality of my friends and family was heart rendering. I rolled in like a rambler and left full of good food, laughter, and strong coffee. I carried an increasingly buoyant load of love around with me from house to house. I am so exceedingly grateful that in my life I have people who I can feel connected to even when I’m miles away.

These are the people who bring a smile to my face as I’m falling asleep and whose very presence makes me feel healthy and whole. I just wanted to take a moment to celebrate the power of being present with each other, here at the start of this new year.

Follow The Sweet Adventurer on WordPress.com
Join 914 other subscribers